“How do you feel, sweetie?” my mom now asks me at least ten times a day from her new bedroom on the living room couch.

My dad has been quarantined in their upstairs bedroom for a week. He stays locked away, lying in bed in sweatpants and old white t-shirts that are soaked with perspiration, because it is too hard to change them, too hard to stand on his feet longer than what it takes to get to the bathroom. He’s been reporting to his essential job with the Metropolitan Transit Authority as scheduled for more than a month while my mother works as a paralegal from home, my younger sister works part-time as a waitress since she took the semester off from college and I do online classes.

He came home from his job as a shop clerk for Metro-North Railroad on a Friday afternoon in March and said his co-workers were “dropping like flies.” No one in his department had gotten sick until that week. My father, Michael, is quite the hypochondriac. He says he’d been coughing, but he’s always coughing. It is hard to get rid of a cough from 40 years of smoking cigarettes, even though it’s been 10 since the last one.

He called his company’s coronavirus hotline two days later, which automatically provides employees a 14-day paid sick leave. The rest of us were immediately pissed off. We were sure that he only had a cold or allergies and that he was being dramatic as usual, especially when he’s sick. Our only peace during the day happens while he’s at work. We knew the next two weeks would be difficult whether he was sick or not. The next morning, he drove to Danbury Hospital in neighboring Connecticut – the only hospital in our area providing testing and care for COVID-19 patients – and got a swab stuck so far up his nose he swears it touched his brain.

His doctor called 24 hours later – much sooner than any of us expected – and confirmed his diagnosis of COVID-19. My mom and sister drove to a pharmacy 40 minutes farther away than our usual one because our neighborhood drug store does not stock his cocktail of prescribed medications, many of which I cannot pronounce – including the now-infamous hydroxychloroquine that President Trump announced he’s taking to stave off the virus but that is doubted by many medical professionals. A pharmacy employee delivered the white paper bag of medications to the car on a plastic tray.

We immediately disinfected everything in the house that my father could have possibly touched – doorknobs, light switches, the refrigerator handle. But by then it was too late. My mom and sister woke up the next morning with flu-like symptoms – sore throats, coughs and fevers.

I was – and remain – the only one in the house who is still healthy. I want to keep it that way so every day I take six vitamins.  My regular regimen already included iron and vitamins C and D3. But at the recommendation of my doctor and articles my father read online about how to boost your immune system to help fight the virus, I added Echinacea, zinc and vitamin B3. I have had asthma since I was a child and suffer from chronic bronchitis. Any cough or tickle in my throat is enough to make me and my mom panic.

I’m a senior journalism and psychology major at Stony Brook University and it is strange to be living through a global news event on such a personal level. Under other circumstances, I would probably be writing stories about families like mine. Instead, I’m writing a first-person piece about a worldwide pandemic that invaded the house where I grew up in Carmel, New York, and touched the people I love.

This can’t be happening to us, I keep saying. But then I think, why not? The coronavirus has touched millions of people around the world. Are we lucky because our symptoms are mild? Do I tell professors and friends I have it, even if I haven’t been tested? My family’s new normal is totally abnormal as we live in separate rooms and record temperature spikes, as we watch TV wearing respirator masks and communicate virtually even though we are only feet away from each other.

All the friends I made at Stony Brook are graduating this May, and I am not there to celebrate with them. Of course, they aren’t there to graduate. And I’m not even sure if I’ll be able to return to campus for my last semester or walk across my own graduation stage in December. My four years of hard work as a double major are worth more than one day of celebration, but it saddens me to know that I am being robbed of this rite of passage. So is every other college senior.

The doctor told my dad, a 59-year-old type II diabetic and former smoker with a slew of other health conditions like high blood pressure and sleep apnea, that he has a 50/50 chance of surviving the disease. It seemed hard to believe because his symptoms were mild and his 101-degree fever was going down – at least temporarily.

But as he seemed to be getting better, my 19-year-old sister, Francesca, was getting worse.

Our rooms are only two feet away from each other and share a wall, but I haven’t seen her in six days. I don’t go into her room and she doesn’t come out. She sleeps all day and night and I can hear her footsteps as she walks down the hallway to the bathroom and back. She can’t stand long enough to take a proper shower, so she sits in the bathtub and lets the water rain over her.

I eavesdrop on her virtual appointment with our doctor. “Everything hurts and I can’t stop coughing,” my sister tells her. Doctor Z says we all likely have COVID-19, whether we are showing symptoms or not, because it’s nearly impossible to social distance when we all live together.

My 61-year-old mom, Lisa, recovered quickly after a couple of days and we kept working as usual – she for her New York City law firm and I as a college student – while providing aid and comfort to my father and sister by bringing food, medication and clean clothes. The four of us group FaceTime multiple times throughout the day to check in on each other, request more food, or in my dad’s case read out loud the latest information about the virus he found while perusing Facebook – his primary source for news.

My dad is the chef of the family but since he can no longer cook for us, I’ve assumed that duty. I enjoy cooking – I picked up the habit after moving into a campus apartment. My five roommates and I took turns each night cooking dinner for each other. But nothing I can whip up will ever compare to my dad’s shrimp alfredo or chili, his new obsession. He’s still trying to perfect his recipe.

I don an N95 mask that covers my entire face and neck and pull on the too-big blue latex gloves that slide off my hands to deliver meals to his room. Despite having no sense of taste or smell he complains that I make it wrong – no matter what it is. I don’t know how you can make pasta, soup and tuna sandwiches wrong. Sometimes I open the door with a Clorox wipe as a barrier between my skin and the knob to throw his favorite snacks –  chocolate rice cakes and peanuts – or boxes of tissue at him from where I stand in the hallway.

The COVID-19 diagnoses are on all our minds but we treat the illness like any regular cold or fever. We are sympathetic for what he is feeling but after a few days, we grow irritated. My dad – who was quick to yell at us for not wearing masks or gloves in public before he got sick – wanders out of his bedroom with no warning, uncovered and unprotected, and touches everything in sight. Contaminating vitamin bottles that we all share, spewing danger as he reaches for the banisters or the sink faucets.

My mom grudgingly trails after him with Clorox Wipes and Lysol. In just one week, they’ve probably fought ten times about him not wearing his protective gear and putting the rest of us at risk. Because she is still working, she can’t run around the house and disinfect everything a hundred times a day.

Our new rule is that masks and gloves must be worn in common areas of the house – the kitchen and living room – even though by now we are all carriers of the disease. I wash my hands so many times a day they are now so dry they bleed. No amount of moisturizer or Vaseline helps. As soon as I rub my hands with lotion, I have to wash them again.

Today, a week after his diagnosis, my dad is checking himself into the hospital since his fever will not break. Even though he said he’s not staying there, he packed a bag. I am thinking about the 50/50 chance the doctor gave him. He was told he must go to the hospital alone, so we send him off with a socially distanced goodbye and return to our work – my mother to a conference call and I to a reporting class on Zoom. We don’t expect to see him again for days or even weeks.

But three hours later, surprise, there he is with new medications in one gloved hand and a reusable bag of groceries in the other. “I’m home until the 10th of May,” he announces.

I dream of the days when I hang out with my friends again at bars and concerts, or laying by a pool. But for now I wrap my mask around my ears and reach for a yellow container of Clorox Wipes and disinfect the doorknob before bringing my dad his dinner.

After a month of living with the coronavirus, I’m happy to report that everyone in my family is recovering. My dad went to the hospital again for more scans and tests and is waiting for the side effects of his medications – headaches and chest pains – to subside. He hopes to return to work soon. My sister is still looking forward to getting her sense of taste back. My mom and I remain symptom-free. She continues to work from home and sleep on the couch. My semester of remote learning ended and this summer I’ll be freelancing and tending to the garden I started in my backyard. We’re eating dinner together again and roaming the house mask free. 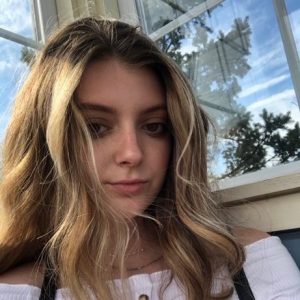 I am a senior at Stony Brook University double majoring in journalism and psychology. I am the executive editor at The Press, the campus culture magazine. I enjoy writing and reading about music and entertainment and hope to join that field one day.