There are certain fleeting moments in life, when you feel reality slipping from your grip. Situations that don’t feel real, but are. We’ve all had them, those glimpses of the world as you know it, but something just seems off. It’s an unsettling feeling, like leaving the cinema at night when the car park sits dark and still, or driving down the motorway at four in the morning, the uneasiness of not passing another car for miles. Maybe it was being in school late after hours, and the quietness of the hallways that were once crammed with bodies and backpacks, or waking up before your alarm clock and checking the time, only to see it is still the middle of the night. Maybe you have experienced this feeling, maybe you haven’t. I certainly have.

I experienced this a little more than two months ago, at John F. Kennedy airport, Terminal 7 – a place usually bustling with briefcase businessmen, spring-breakers, honeymooners, vacation-goers, crying children and flustered parents. On a chilly March night, the airport terminal was a ghostly shell of a building, with a handful of glove- and mask-wearing travellers, flinching at every cough and throat clearing. And me, of course, juggling the three suitcases I had frantically packed my life into during the previous 24 hours.

Due to the COVID-19 pandemic, I had to leave my study abroad programme at Stony Brook University. The campus had closed down, and each day, I watched as cars disappeared from the parking lot outside West Apartments, where I lived, leaving it empty. I had spent the past couple of days in a blur  – phoning airlines, panic-buying extra suitcases to squeeze my excessive wardrobe into, searching futilely for hand sanitiser, and anxiously anticipating the journey ahead – home to England.

It was certainly a testament to how quickly things can change, and how strange that can feel. One minute you are eagerly packing for your spring-break trip to California and the next you are fleeing a country you had begun to call home. Also, it is a strange thing to see a dorm room full of your things – pillows and books and bulletin-pinned pictures – empty so quickly. It’s even stranger to look at something for the last time, knowing it is the last time. I took one final look at the blank white walls, stained with a few scatters of Blu Tack, and the single bed that stood oddly high off the floor and squeezed into a corner, before closing the door behind me.

A more-prominent-than-usual disinfectant smell seemed to follow me around the airport. You start to notice things like that during times like these – the little things you never paid much attention to before. Like the familiar smell of citrus antibacterial spray or watching in bathrooms as people wash their hands longer than usual, vigorously massaging cheap, foamy airport soap between their knuckles.

There is something uneasy about being alone on an airplane, and even more to be said for being on a near-empty airplane. Being 11,277 feet in the air without mobile data or Wi-Fi can certainly make you feel disconnected from the world. But to look around, and see empty seat after empty seat – there is no eeriness like it. I spent the next nine hours drifting in and out of sleep, shuffling my “wistful 50s” playlist, using Patsy Cline’s voice to drown out the static buzz of airplane cabin air-conditioning, and trying to ignore the unnerving feeling that I was some stoic protagonist in a melodramatic dystopian fiction.

As soon as I landed in the UK, the country was faced with a nationwide lockdown – already there were 2,626 reported COVID-19 cases and 102 deaths – which didn’t exactly help this inner dystopian monologue I had going on in my head. Rules were set in place. You could only leave the house for essential items and/or one daily dose of exercise. You would be surprised at how grateful you can become for a simple half-hour walk outside when it becomes your only escape from the mundaneness of your own home.

I live in the historic market town of Ashbourne, and with the Peak District National Park on our doorstep, we are surrounded by the vast greenness of mountains, hills and dales. The town itself is small, with a population of about 9,000 and a cobbled market square and town hall that have stood the same for hundreds of years. I live in the surrounding suburbs, in a housing development that winds its way around the town. The first walk I took around my neighbourhood once I arrived back on English soil was the first time I caught my breath.

It was one of those sunny days when you struggle to point out a single cloud above you, a rare yet seemingly beautiful sight. The air was warm, just warm enough to wear a t-shirt and feel the sunshine on your shoulders. It was that time of day when everything starts to turn a little bit golden, and your skin takes on an orangey flush and the pavement soaks up the final glimpses of sunlight before dusk arrives.

I took my usual route, following the sidewalk that winds its way up the hill and through the neighbourhood, past the local Primary School and back down the hill, a suburban blur of brick houses and patches of green lawn. But something was different.

It has become custom in the UK for people, predominantly those with children, to place pictures of rainbows in their windows for the whole neighbourhood to see. People in my neighbourhood, and all across the country and beyond, have embraced this trend. Rainbow paintings sit proudly in downstairs windows, stickers plastered on empty bus-stop notice boards. Some people have even taken to painting a section of bricks on their houses shades of red, yellow, blue and green.

Again, it felt like one of those moments that don’t feel real, but are. A neighbourhood washed with colour. Watercolours, collages, sketches, acrylic paint, dazzling Microsoft word art, I’ve seen it all. Pavements, once dull grey tarmac, were now daubed in pastel chalk drawings – rainbows, hopscotch trails, smiling faces that look up at you as you step over them. Neighbours I’d never even seen leave their houses now had chalk mosaics melting down their driveways. Even the houses that are notorious as the ones where the inhabitants turn away trick-or-treaters on Halloween now had rainbow posters beaming from the windows.

I reached the top of the hill, only slightly out of breath but encouraged along by the birds whistling and chirping as the golden hour presented itself, and the neighbourhood took on this saturated glow. Another thing I had never paid much attention to before. I had never noticed the way red brick houses catch the sun. This ruddy, orange suburban glow. I passed Hilltop Primary, the school I went to as a child. The playground sat vacant – but a giant white tarp washed with a painted rainbow was hanging proudly outside the empty school gates, the words “Hilltop Together” written above it.

Why rainbows you might ask. In Christian culture, the Abrahamic God sent a rainbow to Noah after the great flood to act as a sign that humankind could go forth without fear. Even regardless of religion, rainbows have always acted as symbols of promise and hope. From Dorothy’s desire for a place where “troubles melt like lemon drops” to Irish folklore of pots of gold, rainbows have always promoted optimism and promised better days. A place where all our hopes and dreams come to fruition.

It has also become a ritual throughout the country on Thursday evenings at 8 o’clock, for people to open their windows, stand on their front porches or in their back gardens, or the edges of their apartment balconies, and clap for the NHS – the National Health Service, our tax-funded healthcare system for all UK citizens. It’s a simple way to show our appreciation and give thanks to the healthcare workers who selflessly protect our communities, working countless hours to the point of exhaustion and risking their lives in the act of helping others.

The first time this ritual was put into practice was certainly surreal. Another one of those moments when reality just loses all context. I opened up my bedroom window, leaning out just enough so my elbows rested on the windowsill, catching the March breeze. The whole street erupted in a cacophony of applause, cheering, whistles, cowbells ringing, pots and pans clanging together, people crying out “Thank you NHS!” It is surreal even weeks later, when you slip on whatever miscellaneous shoes are lying around to stand in your front garden, listening to the claps and cries, and the old man who plays the trombone down the road.

There is something to be said about community in times of hardship. It often takes times like these to realise that there is strength in community. In a time of isolation, it is important to remember we are all undergoing this shared experience together – all the fear, the loneliness, the anxiety, the boredom, the loss, the monotony of everyday life. We have all lost something because of this pandemic, whether it is as trivial as having to leave your study abroad programme, or the harsh actuality of losing jobs and loved ones. It can feel as if you are all alone in these strange times, but sometimes all it can take is a walk around your neighbourhood – that familiar blur of brick houses and green lawns, now washed with colour as sunset approaches – to feel the comfort, and strength in community.

I have spent the past couple of months finishing the remainder of my Stony Brook courses online, becoming all too familiar with Zoom and enjoying going to class in my pyjamas. It has been raining the past couple weeks. Meeting a miserable grey lull when you open your curtains each morning isn’t exactly inspiring nor promising, but sometimes you need a bit of rain. It helps you appreciate how warm the sun feels, and how the grass tickles your back when you lie down on the earth and look up at the vast night sky. It helps to remember that rainbows cannot appear without rainfall.

After the rain, everything looks greener. There’s an earthy, musky scent. Dewy droplets cling to the grass, and the air feels cleaner, lighter even. And the swollen grey clouds begin to dissipate, letting in a glimpse of sunlight.

Better times are ahead. 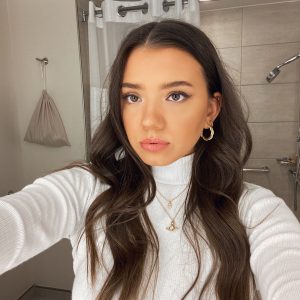 I am a third year English Literature student at the University of Leeds. I attended Stony Brook as an exchange student on my university’s study abroad programme, with the intention of learning in a new environment and immersing myself into American culture and literature.

In September I will be going into my final year of University, and will be undertaking a creative writing dissertation in the form of a screenplay, to correlate with my ambition of going into screenwriting once I graduate.