Tied up to four weathered cleats with a length of tattered rope, “Fat Allis” slowly pulls in and out of place with the moving tide in Oakdale’s Grand Canal.

Green mold dresses the once-white, aged cabin of the tired clam boat. Throughout the day, a pump spits water out of the hull, her only lifeline to staying afloat.

“I love your boat,” a passing neighbor says as he jogs by on the Hollywood Drive Bridge, a half-century-old landmark suspended just a few feet in front of Allis’s bow. The young man in a gray sweatsuit and black baseball hat pauses to give a thumbs up, then continues on his journey.

In the gloomy reflection of Allis’s murky windows, her owner – a 55-year-old with a full head of dusty blonde hair named Charlie Yezek – shouts, “Thank you,” as he walks along the creaking boards of the dock.

Charlie wears a tie-dyed t-shirt that proclaims, “Clam Power,” and bright red Champion sweatpants that stand out against the colorless yard as spring has only just begun.

“My boat gets more compliments than the million-dollar yachts up the river,” he says, referring to the Connetquot River, which hugs the hamlet’s western border and opens into the Great South Bay. Charlie’s eyebrows rise as he smiles.

Allis is at home in the Grand Canal – a series of shallow, interconnected waterways created in the early 1900s as part of the 900-acre Idle Hour estate of William K. Vanderbilt, grandson of railroad magnate Cornelius Vanderbilt, and a vestige of the gilded age of Long Island’s South Shore.

The name Allis comes from Allison Boats, her Tennessee-based manufacturer, and was combined with the word “fat” because the 32-foot boat had a wider-than-usual beam, measuring just over 14 feet instead of the customary 10 feet.

“She is a part of history,” Charlie says. “Allis represents the clamming industry on the South Shore of Long Island” – where once the bivalves were bountiful. In fact, in the 1970s when Charlie plied the waters, the Great South Bay was often called the “hard clam factory” and was the East Coast’s leading producer of littleneck, cherrystone and chowder clams.

Charlie and his father, Charles, Sr. – known as “Captain” or “Capt.” – made a living clamming together for more than 15 years. In those days, Allis was docked at Greene’s Creek Marina just a few blocks from Capt.’s house in West Sayville. But when Charlie eventually bought a house in Oakdale with enough bulkhead space for Allis, his father gave him the boat they once shared. The Captain has since retired and lives part time in Naples, Florida, where the weather and the water are warmer.

Time and tide, as the saying goes, wait for no one.

“The bay isn’t what it used to be,” Charlie says. “It was no secret that the clams were worth a lot of money. Lots of folks clammed until there were none left.”

The annual harvest of hard clams on Long Island has fallen by 99 percent from its peak season in 1979 of more than 750,000 bushels. Charlie and his father kept clamming into the mid 1980s. But as the clam population deteriorated, they gave up.

More than two decades ago, Charlie became a licensed electrician, a member of the International Brotherhood of Electrical Workers, Local 3, in New York City. While he didn’t exactly turn into a landlubber, Charlie’s lifestyle did change as symbolized by the clam tongs and rakes, tools of the past that now lie rusted on Allis’s deck. And with no reason for clamming anymore, the boat has rested idly in the same spot for the past 20 years.

“People ask me why I won’t part with Fat Allis,” her owner says. “She keeps my good memories alive – her and a few pictures in my house.” The black-and-white pictures hang in oak frames on the walls of Charlie’s dining room – distant memories of the long-ago days when a father and son clammed in the Great South Bay on a boat named Fat Allis.

On a still-chill day in early spring when the hamlet of Oakdale is virtually deserted due to the coronavirus and almost 100 confirmed cases have been recorded, Charlie sits on the dock in a deck chair. He pops the cap off a Samuel Adams with a screwdriver and leans back, propping his feet up on a second chair and crossing his legs.

Neil Young cranks in the background from the Bose surround sound system on the back porch of his weathered gray house. “It’s 5 o’clock somewhere,” he says as he looks out at the water.

The rock classic, “Old Man,” echoes down the canal as kayakers float by. Charlie plugs in a bubble machine mounted to the roof of the cabin on Allis. “The kids love it.”

Bubbles dance in the air and float out to the kayakers. Some of the bubbles kiss the kayakers’ faces and others settle on the water and ride the current.

A man sporting large black sunglasses cuts through the water in a bright blue kayak while his companion, a woman in a floppy sun hat, maneuvers her lime-green kayak in an attempt to achieve social distancing of the aquatic kind. “It feels magical,” she says of the bubbles.

The decrepit boat is now a bayside attraction. “She’s become a landmark in this town,” Charlie says. “One of these days, I thought to myself, I’ll retire, and Fat Allis will get a makeover. But now, with the coronavirus situation going on, I may have the time to give her that much-needed makeover sooner than I ever imagined.”

For Fat Allis, the coronavirus may bring a new and unexpected lease on life. 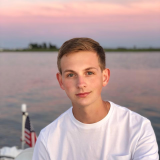 As a senior at Stony Brook University, I collaborate my ideas as a journalism major and a garden instructor to write Long Island news.