You can find it in parking lots, on roadsides, in storm drains, even on hiking trails. Litter is not quite ubiquitous in Westchester County, N.Y., but you will come across it at least once a day if you walk along the streets, trails and roads of the communities that make up these heavily forested New York City suburbs.

Until recently, litter was largely seen as an annoyance by most residents. Perhaps some looked at it and bemoaned human carelessness and disrespect before throwing away the smaller items and going on with their day. Generally, it was an issue of low-level concern and common enough that no one paid it much mind. But that was before litter became a COVID-19 minefield

Over the past two months, social media from Croton, Ossining, Cortlandt Manor and Peekskill has reflected a steady stream of complaints about personal protective equipment strewn across the streets. Narrow streets and trails already made into obstacle courses by social distancing have become booby-trapped with discarded gloves, masks, and tissues. Each glove’s unknown wearer could have left it covered in coronaviruses. Step on a tossed-off glove and a new transmission route could begin – glove to sole, shoe to hand, hand to face and the virus has found a new home.

Something needed to be done, but responses differed. Some offered honey, others preferred vinegar. Here are two of those responses and how they worked out.

Ocean Morisset is a 43-year-old African American artist with short natural hair, a fit build and a vivid wardrobe of hats and colorful tunics. He is a self-taught, freelance documentary photographer who moved to Peekskill from Brooklyn six years ago. Since then, Morisset has gained a local reputation for his regular presence on the streets, taking pictures of “life as it happens”, as he describes his work. He lives with his husband and his mother-in-law.

“Prior to the coronavirus pandemic, I had just been setting out to build my portrait photography business here in Peekskill,” Morisset said.

His work focuses on close-up candid photos taken on the streets of Peekskill and New York City with an iPhone. His portfolio includes a series of photos of African American fathers and their children he calls “Dad Duty” as well as a self-published photo book called “Peekskill Through My Eyes”, released in August 2019.

Since the pandemic came to Peekskill, the nature of Morisset’s work has changed. He now obeys social distancing rules and carries a bulky Nikon DSLR camera with a long-distance lens wherever he goes.  It was when he pulled into the parking lot of a local grocery store that he first saw the discarded gloves.

“It’s just really, really distressing to see on so many levels,” Morisset, who works at a hospital in New York City, said.

So he decided to use his art – and his local fame on social media – to take on the issue. “I’m pretty known in the Peekskill community,” he said. “I feel like I can use my platform as an artist to drive this home”

Morisset arranged closeups of the gloves he photographed in Peekskill parking lots into tight grids, creating artistic compositions that emphasize their ubiquity. Each portrait shows bright gloves against dark asphalt. Then, he uploaded his creations to community Facebook pages known to be frequented by Peekskill citizens and their government officials.

Morisset’s photos are a form of public shaming – of both the litter bugs and the property owners, who seemed unconcerned with sanitation. A common theme of his photos and other posts is casting the culprits as “pigs”.

“Shout out to the filthy pigs amongst us”

“We are better than this! Or are we?”

He thinks his tactics are working since he is starting to see fewer gloves and masks in local parking lots, where they had been most visible. He attributes this to businesses making more efforts to keep their parking lots clean. Regardless of the cause, the effect is that the difference is palpable.

At 25, Ian Bonnell is tall and slightly stocky with a dark tan and a nervous smile. He has been an avid recreational runner since his time at Irvington High School in Irvington, N.Y.  He started with three-mile runs and now runs an about five to six miles every day. He once ran 10 miles after losing track of time in a state of hyper-focus he calls “flow”.

He received both his bachelor’s and master’s degree in mechanical engineering from a five-year combined program at Stony Brook University. It was his childhood dream to work for NASA. He’s temporarily back in his home village of Croton-on-Hudson working as an online math and physics tutor before starting his engineering doctoral program at Stony Brook. So he’s been using the plethora of boardwalk, riverside and forest trails in the area for his daily exercise, which he calls “me time.”

“If you see a trail,” Bonnell said of the many his hometown offers, “I’ve probably walked, run or biked it.”

He usually bikes or runs along the village roads to get to the trails. Bonnell was on his way to the Graff Audubon Sanctuary trail bordering the Hudson River when he first encountered the minefield along Albany Post Road, a section of New York Route 9A. Discarded gloves were strewn around a bus stop. More were in front of the Sky View Haven Nursing Home.

Bonnell’s mother, Kathy Riter, is an oncology nurse, who works with chemotherapy patients, whose immune systems are already overtaxed by both their chemo drugs and their cancer. She made sure to teach her son hospital hygiene rules as he grew up. So, he was appropriately horrified when he started seeing discarded and possibly infected protective equipment near a vulnerable population.

He started collecting evidence on his phone, snapping ten or so photos with each hour-long run. Many of the gloves he saw, he recognized on the next run and the next run and the next run. They might have even been the same gloves. He also found surgical masks tossed on the roadside. Once, he even photographed two used syringes in the street. With this evidence in hand and more coming in almost every day, Bonnell started a solo campaign with two goals: more trash cans in the village and new public service announcements from the local government about bio-hazardous waste.

Bonnell started a chain of calls and emails as various governmental organizations tried to kick the can down the road. Starting in the last week of March, he emailed the county-operated Bee-Line Bus System requesting trash cans at more bus stops.

In one email, Bonnell wrote: “If it’s too costly to post them at ALL the stops, then perhaps place them at stops that are (a) known to be in high density areas, (b) near an emergency service….(c) located near a high concentration of potentially vulnerable individuals …or (d) located near an “essential” business.”

The bus system’s assistant for operations, Joseph Pondiccio, responded by email on April 3:

“We do not have the personnel or surplus to provide each stop with a trash receptacle. We have over 3,000 bus stops and it isn’t possible to get to each one in a timely manner.”

Another employee left a voicemail informing Bonnell that the Croton Village Board of Trustees had been notified about the litter problem at the Sky View Haven bus stop. Finally, Bonnell contacted the Croton-on-Hudson Village Department of Public Works to obtain support until the county had time to address the issue. He received a one-sentence response from the superintendent:

“We will take a look at these areas”

For his efforts, Bonnell has only seen one plastic trash bin set up near the nursing home on route 9A, across the way from a trash bag tied to a pole. The litter continues. He plans to get the issue inserted into the next Zoom meeting of the Village Board of Trustees.

The concurrent efforts of Morisset and Bonnell to “flatten the curve”, so to speak, of the local litter epidemic are still too new to be certain of their long-term effectiveness. Morisset still occasionally takes pictures of litter, but not as many as before. He feels the two collages he created have made his point. Bonnell is still preparing for the village Board of Trustees meeting and dodging biohazards on his daily runs. He believes that, given a logical explanation and an opportunity, most people will do the right thing.

“I don’t want to shame people into doing it,” he says. “I want them to…think before they do.”

He admits that this will not work on everyone, citing his own father – who distrusts global organizations like the World Health Organization – as an example, but he approaches problems like an engineer. It doesn’t need to be perfect; it just needs to work well enough. When he sees a problem, he looks for the path of least resistance and most impact.

Ocean Morisset has many of the same concerns but sees them in light of his own professions. As a front-line health care worker who tends to an elderly mother-in-law with his husband, he is acutely aware of the dangers posed by these actions and takes them personally. How can he not, when he knows if he gets sick it might affect his elderly relatives and his vulnerable patients?

“People are pigs,” Morisset said. “How else do you describe someone like that…I’ve heard people called worse.”

When the dust clears, perhaps both of these men will be successful, perhaps neither. For now, they keep trying. 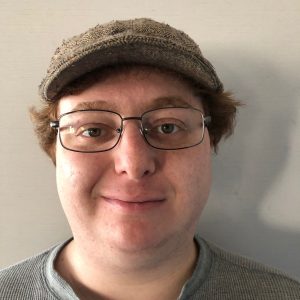 I am a 23-year-old journalism major with senior standing at Stony Brook University. I already have an Associate's Degree in Journalism from Westchester Community College. My interests lie in science journalism, promoting scientific literacy and wonder and promoting replication studies and other misunderstood and underfunded parts of the scientific process. My existing work includes two years worth of articles in the Westchester Community College newspaper, The Viking News, and articles in Technolawyer coauthored with other employees of the computer consulting company, Basha Systems LLC.