The aroma of fresh grass lingers in the spring air, as a gentle breeze carries it along the almost-deserted soccer field. The sun’s torching presence is obvious through the streams of sweat channeling down the side of my face. Without even stepping a foot onto the track, I’m drenched, but determined.

Nature is putting up a good fight to make sure that the grounds of the Anne M. Dorner Middle School in my hometown of Ossining, N.Y. – where I am waiting out the coronavirus lockdown – stay closed. I shouldn’t be here – even Gov. Andrew Cuomo says so. But alas, here I am.

I adjust my sky blue N95 mask and bounce on tiptoes down the steps to the track. For me, it is a moment of freedom, an antidote to the isolation and boredom of weeks in lockdown ever since Stony Brook University, where I am a journalism major, sent its students packing, back to our hometowns to finish the semester on Zoom.

As I walk along the grounds of AMD – as the middle school is known – I look at what is and isn’t in front of me and think back to when I was a kid. The lawnmower noise that added background music and ambience to my then-modified soccer practices is nowhere to be heard. Neither are the groundskeepers who’d be chuckling at their own jokes by the basketball court bench right around this hour. It all just seems so empty.

Then again, it’s coronavirus season and — like my curly brown hair left to grow during quarantine — the uncut, unkempt greenery is a sign of the times. It’s also a reminder that all life needs some maintenance.

A man wearing a white golf cap walks his cocker spaniel around the periphery of the field. He looks to be in his 50s — too young-looking to be retired, possibly someone who’s working from home and taking a break from life on Zoom, like me. But the man shows no interest in the field, instead walking laps behind the black metal fencing while loosely gripping the leash of the energetic puppy. He has no intent to cause mischief. But I do.

The temptation to hop the fence onto the open grass is as irresistible as speeding is for a teenager who sees an open road. But the pitch is off limits. It’s taped off — quarantined. This summer, soccer must find a new home.

Luckily, there’s another field right next door. Ossining’s two biggest soccer fields are adjacent to each other. From a satellite view, they’re brothers. But up close, they couldn’t be more different. One field has been there for decades while the other was built in 2007. The newer, more luxurious Dilley Field is the “middle pitch” where all my memories happened – it’s my Dairy Queen, that quintessential hangout of adolescents and teenagers. For me, the sentimental value of growing up on this field make it infinitely more valuable than the $7 million the school district paid to build it.

Today, as I look at the tracks of my youth, my memories are reignited.

The goalposts at the AMD field have been removed and the grass is about two feet high. The ball I brought with me barely rolls unless I really put my boot to it. The older you get, the clearer it becomes that childhood is more magical and underappreciated than we realize. Now grown up, I’d have to settle for turf. So I hop the fence anyway. The padlock might keep others out, but not me.

Perhaps, the reason the turf field seems less magical, and to a certain extent, less traumatic, is because it symbolizes my unhealthy past.

Back in 2010, when I was in middle school, I participated in track & field on the turf field. Key word: participated. Unlike soccer – a game I love – it was merely an activity to stay in shape. But fit I was not, to use the cadence of Yoda. Track was a relatively boring and one-dimensional sport that I hated. But it was a socially engaging sport that would condition and prepare me for modified soccer, and so it did.

Fast-forward one year to when I was an eighth grader, and made the AMD school team, although I was still a little heavyset. I settled for a bench role, so it never occurred to me how much work I would need to do to get into shape. That was a lesson I’d only learn a decade later.

For the years leading up to my epiphany, my relatively sedentary lifestyle seemed like destiny. No matter how many times my friend-turned-physical trainer, Chris Tenesaca, told me, I never seemed to snap into reality.

“Come bro, we need you,” he’d always say when our friends played five-a-side football on the weekends. His words sounded genuine, but they never really resonated. I thought of myself as another piece in the supporting cast of his soccer team. Well, I was – but not for long.

Chris was like my reciprocal. My five-foot-seven Ecuadorian-born, New York-raised friend was a soccer fanatic, like me. But we were totally different. He played soccer. I watched soccer. Still, he wouldn’t let that stop me from enjoying the sport.

Even though I was easily winded, awkward and clunky off the dribble, he’d invite me to play soccer five-on-five with his Hispanic friends. We shared so much in common – our Hispanic heritage, our light-hearted sense of humor, and our age. We were 15 years old when we met in 10th grade. But our physiques were nothing alike. He was lean and thin as a pencil; I was chubby and saggy like a bag of potatoes.

So during the summer of 2017, when I was a sophomore at Westchester Community College, Chris would pick me up every other midnight and drive us to Planet Fitness where he’d gas me up with motivational words as I jogged on the treadmill for an hour.

“I want to see the sweat!” he’d shout. “That shirt looks like it just came off the laundry! Push! Puuuuuuush.” And he’d laugh – not at his chubby friend jogging on the treadmill, but at the looks people in the gym were giving him. Years later, he’d tell me that they weren’t judgmental looks or snickers, but the smiles of people who knew the pain of working out watching one friend help another.

But that summer hardly seemed to make a difference in the long run – no pun intended. It was only until I took the initiative to change my diet and level of daily activity that I saw results – both mentally and physically.

Two years later I was a journalism major at Stony Brook University. I used the track in the university’s recreation center to condition myself into first, walking, then jogging, and ultimately, sprinting. It was something I never thought possible.

By the end of my first semester, I was back home in Ossining. I’d started jogging daily to my cousin’s house – a six-mile round trip. One day he gave me a rusty old bike. To him, it was junk, but to me, it was a valuable asset to add to my arsenal of cardiovascular training. It proved to be the final piece I needed to jump beyond my weight-loss plateau.

But on the days I couldn’t bike, I’d return to the turf field and jog around the track – this time without Chris. By then, he was working fulltime as a housecleaner, still in Ossining, but he hardly went to the track anymore. His absence was a reality check that forced me to find my own motivation.

The next semester, the fall of 2019, I returned to school a brand new person. I made dozens of friends – other journalism majors, gym buddies, students studying everything from meteorology to psychology. But none were as dedicated to helping me succeed as my childhood friend, Chris. By then, I hadn’t seen him in nearly two years. And he hadn’t seen the new me. I was beginning to think he might never. And if he did, I wondered if he’d recognize me.

But then, on an early spring day in the middle of a global pandemic, I hopped a fence and tiptoed down another set of stairs to the turf field at my old middle school. I took off my mask and ran a quarter-mile lap. Along the way, I noticed a faded yellow Brazil jersey with the name “Neymar” on the back. Many kids wear the Brazilan footballer’s shirt, but I remember the days in high school when Chris wore it brand new. The days when a young soccer fanatic would emulate his hero – Neymar da Silva Santos Jùnior, AKA Neymar Jr. – doing flicks and tricks at the turf field.

Chris lay on the turf, tying his white Nike soccer cleats. I walked past him, keeping just the right social distance, and tilted my head to make sure I wasn’t mistaken.

“Chris??” I asked even though I knew who it was.

He looked up and squinted – not at the sun, but in a quizzical way as if searching for a name to go with the face before him.

The long pause was beginning to alarm me. But then he took off his yellow mask and his words broke the silence into a thousand pieces.

While the coronavirus had separated me from my Stony Brook friends, it reunited me with an old one.

The “how” was tinged with a hint of humor. I took it with a grain of salt.

After all, he was right. I was a new person – and I don’t ever have to think back to what I once was.

I looked back to the empty track that I had spent countless hours in the scorching summer sun circumnavigating. Chris turned to me and asked, “Where are you going?”

I looked at the track, then at him, and then – like getting splashed with cold water on a hot day – it hit me. I knew where I was going. I had fulfilled my potential.

“You ever played shirtless before?”

I looked puzzled. “Nah bro, you know why,” I said as I pointed to my abdomen.

“Haha what bro? No one’s gonna judge you,” he said, laughing.

As I put my shirt on top of the field hockey goal, I looked around and, to my pleasant surprise, no one really cared. The fear of judgment had subsided and I was finally happy in my own skin.

The once “fat kid” was now in his physical prime, and finally, everyone could see it – even him.

All it took was a chance meeting with an old friend in the middle of a global pandemic. 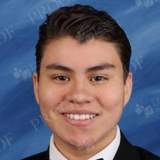 My name is James Bowen, and I'm a 22-year-old bilingual news reporter at Stony Brook University who aspires to work in broadcast journalism. My goal is to one day anchor for a Spanish television news network in the United States.