During the first two weeks of quarantine, I’d cracked open my family’s jacketless hardcover copy of The Best Recipe more times than I could count. After trying and re-trying the classic chocolate chip recipe, whose page was stained and warped by water and vanilla extract, I explored the surrounding pages — recipes we’d never made before. The oatmeal cookies were sweet and spicy, but a little too puffy. The sugar cookies ran together.

Throughout my childhood, cookies were a must during a lull. Whether we were stuck at a rented beach house for a rainy day in Fire Island or snowed in at our Melville home during a blizzard, there was always a recipe to be made, a pan in the oven and a bowl to lick. But now, in a time of self-isolation, every day is a lull, so nearly every day brings a new batch.

A month into life in quarantine, my mom and I had entered the let’s-try-these-strange-recipes-online phase of baking. We worked in between my online Stony Brook classes and into the nights — black bean brownies, chickpea blondies (they came out like falafel squares with chocolate chips), and now, oatmeal chocolate chip cookies a la iPhone recipe screenshot.

I didn’t tell my girlfriend, Kayla, who was sheltering in place four miles away, what we were making — the sweets would be a surprise.

Ingredients paraded out of the high birch cabinet in the corner of the kitchen. Flour, baking powder, salt, sugar — white and brown. The jug of applesauce in the fridge made a guest appearance. They first met in a purple bowl, then in the KitchenAid, where their component parts were reduced into one uniform goop. My mom poured the cup of chocolate chips into the mixer and folded them in by hand. I watched and stole handfuls from the industrial-size Nestle bag. I meted out enough spoonfuls of dough to populate two baking sheets — just enough that I had some left to scrape off raw.

After they spent 12 minutes in the oven, the smell of spiced oatmeal filled the kitchen and started drifting up the stairs to my room. We cracked open the oven door to reveal a small army of cookies, fully formed and ready for action. I FaceTimed Kayla.

Then I hung up.

The cookies were already disappearing by the time I began collecting them in a plastic bag. Six felt like the right number. I thoroughly washed my hands before making my selections from the batch. With a bandana covering my nose and mouth and black rubber gloves on my hands, I left the house for the first time in what felt like a year, but was actually three weeks.

The sky was faintly blue but fading fast. I unlocked my car and felt the resistance of weeks of dormancy as I pulled the handle. Inside, the worn leather was cold for April. With every exhale, warm air piped out of the bandana and fogged my glasses as I tried to set the temperature correctly. I swiveled my head back and forth multiple times before I started driving, visibly jittery in the rear-view mirror.

My route, the one I’ve driven countless times before, was ingrained in my memory: Old Country Road to Foxhurst to Broadway. Kayla and I have been dating for nearly two years. Even before then, I drove this way to bring her home from our high school orchestra rehearsals. I met her on the first day of sophomore year, when her guidance counselor accidentally put her in the advanced orchestra class without an audition. We shared a music stand in the double bass section until I graduated two years later. Now, both of our college schedules have moved online.

The lights were all green and the streets, typically packed with rush-hour traffic at 5:30 in the afternoon, were clear. Every parking lot I passed, usually filled with cars, was now sparsely populated.

Yet I wasn’t zooming toward my destination — in fact, I was hovering below the speed limit, dealing with the nerves that came with leaving home in the middle of a global pandemic. I felt out of place as the only person in motion for miles. After a full month indoors, I’d lost some of the instinctive rhythm of driving. That disorientation, coupled with the eerie surroundings, made every turn nerve-racking.

When I reached Kayla’s street, a narrow road made narrower by lines of parked cars on either side, I searched for an opening to park my own. The spot I found was just feet from where I parked the night of my graduation party, when she told me she like liked me, and I said I like liked her too.

I took a few deep, foggy breaths before I texted her:

I walked up her driveway, past her cat playing on the asphalt, to the front door. Behind glass and wrought iron, the face I’d seen on my screens every day for the past three weeks was there, really there, but distant. I knelt down and put the bag of cookies on her welcome mat. She couldn’t see my smile through the bandana, but I could see hers. 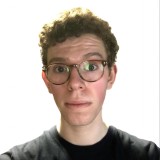 I’m a sophomore journalism student at Stony Brook University with a passion for technology and art. I currently serve as the managing editor and creative director for the Stony Brook Press, SBU’s campus magazine, where I create graphics and layouts and contribute writing.