My best friend, Laila, and I were planning a spring-break getaway to Puerto Rico with our boyfriends. But our plans were quickly thwarted by the coronavirus and the lockdown that followed. Instead of a tropical island escape, I spent spring break in the comfort of my College Point, Queens, home with my family. Actually, I’ve been there since March, when Stony Brook University, where I am a journalism major, extended the break, then put us into Zoom classes for the rest of the semester.

It wasn’t as bad as I thought it would be. Besides, I’ve been able to go to my very own deserted island anytime I want – on Nintendo’s “Animal Crossing: New Horizons,” the newest installment of the game series on the Nintendo Switch.

I’m instantly relaxed whenever I play in my room surrounded by my 12 plushies – a Disney Dumbo, the Cudleez version of Mickey Mouse and Minnie Mouse, a rainbow Shiba Inu, and a blue cat with a yellow chef scarf, to name a few – sprawled over my aquamarine comforter and my pink floral bed sheets. Like many people, I’ve been a little anxious during this unprecedented pandemic. I need an escape from the real world. “Animal Crossing: New Horizons” – an open-ended social-simulation game on a virtual island with talking animals and infinite possibilities – is just the ticket.

My Uncle Frankie and Aunt Nancy are fighting COVID-19, the disease caused by the virus. They think my uncle caught it at Newark Airport, where he works in customs and had contact with thousands of travelers coming in and out of the country even before anyone knew what was happening. My mom’s cousin who works as an engineer for the Metropolitan Transportation Authority also contracted the disease at work. She lived with my grandaunt, who was in her late 80s and died from COVID-19 within a week. My family can’t even give her a proper funeral. She was so healthy and energetic, she walked everywhere.

The last memory I have of her is her walking to my grandmother’s place for Chinese New Year back in January. I can’t even imagine what my cousin, who is my age, is going through. I would be devastated to find out that either of my grandmothers died of COVID-19. I’m afraid when my parents go to the supermarket – my dad is 69 years old and my mom is 59. My mother has gout and high blood pressure and had a kidney transplant almost 30 years ago. Knowing my parents and other relatives are in high-risk vulnerable populations makes the coronavirus a very real and scary thing.

Even my friend, Laila, was a victim of the virus. She was fired from her job as a supermarket cashier when she complained that the store wasn’t adhering to social distancing guidelines and that her boss – who was coughing and later diagnosed with COVID-19 – wasn’t wearing a mask.

And so I prop myself up on my headrest and down pillows and play “Animal Crossing: New Horizons” on my teal-colored Nintendo Switch Lite. My boyfriend bought me the new console and I covered it with a pink sticker to protect the original plastic.

The game features 24 different background songs – one for every hour of the day and night – that play as you chop rocks, cut down trees, and build things. Variations of the songs play when it’s raining or snowing in the game. I can be fighting the elements as I talk to my villagers, catch fish and pay off loans – all while I’m at home hiding from a deadly virus.

The game starts in an airport where your human character – you decide physical attributes like eye and hair color, and you can even change them later in the game – meets twins named Timmy and Tommy. Actually, they’re characters based on real-life animals called tanuki, or Japanese raccoon dogs, which are a nocturnal subspecies of Asian raccoon dogs commonly depicted in Japanese folklore and statues. They ask you where you want to go – you get to name your island and decide whether it’s in the northern or southern hemisphere. The twins show you three possible layouts for your island, and then you’re on your way. The foundation of the game is based on your character moving to a new place, meeting new friends and starting a new life.

When I started playing, my character had long straight black hair that reached below the shoulders. My eyes were brown with two sparkles in them. The nose I picked was a cute little oval, my cheeks had a slight pinkish tint and my smile was shaped almost like a “w.” I liked the way my character looked – I was ready to go to my island and start my adventure.

A character named Tom Nook, the tanuki businessman of the game who is related to Timmy and Tommy, greets you and two animals that are your new neighbors. In the beginning of the game, you have to work for Tom by picking up sticks and rocks. Eventually, he explains how to pay off the loan he gives you to upgrade from a tent to a house. With each payment, you can upgrade to a bigger house with more rooms.

It’s manual labor, but the rewards are immediate since your house gets bigger and you can keep enhancing your island. It’s a casual game that you can play at your own pace. There’s no need to speed through the game unless you want to. Aside from paying off loans, you can customize everything from your home décor to your garden – even the land itself. As you get further into the game, there’s a new feature called terraforming that let’s you build cliffs and rivers.

The two animal-villagers you meet at the start of the game are among the 402 possible animals you can choose to populate your island – pigs, birds, gorillas, elephants, koalas, squirrels, hamsters and many more. These non-playable characters – NPCs in the lingo of the game – have different personalities and speak according to their personalities. This conversational aspect was a feature of the previous four installments of the game, which came from Japan in 2004.

“Animal Crossing” was created by a Japanese game designer named Katsuya Eguchi, who left his hometown at the age of 21 to work for Nintendo in Kyoto, some 300 miles away. He would build a career working on games that became classics – Super Mario Bros. 3, Wii Sports, The Legend of Zelda and dozens of other – and eventually become deputy general manager of Nintendo Entertainment Planning & Development.

But he never forgot the loneliness of his early days in Kyoto and his longing for family and friends. Years later, he came up with the concept of “Animal Crossing” to explore the themes of family, friends and community and depict how important it was to spend time with those you care about.

“New Horizons” – the fifth iteration of the game that boasts three spinoffs – was launched on March 20, just as the coronavirus was bringing life as we knew it to a halt. I wasn’t alone in my desire to escape to an island paradise inhabited by warm fuzzy neighbors, where life was easy and safe and where I was in control of what happened.  Millions of copies of the game have been sold – 13.4 million in the U.S. and another 3.9 million in Japan, with half of them purchased digitally.

What else are you going to do when you’re locked in your house during a global pandemic? I found myself on an island I named Honey Gums with two other inhabitants – a cat named Stinky and a pig called Agnes. Throughout the game you amass more villagers and grow your island into its own civilization that you, the player, create – collecting the materials to build a town hall, establishing a store that sells furniture and tools, opening a clothing store, a museum, and more. The game doesn’t have an end and you can play as often as you want.

A popular meme relays a fake conversation between Nintendo and a fictional “me” that captures the addictive nature of the game.

My Switch tells me I’ve logged 105 hours playing “New Horizons.” But I’ve put in many, many more hours since my introduction to the game was “Animal Crossing: Wild World,” which came out in 2005 on the Nintendo DS, or dual screen. It was a childhood favorite. I remember playing it when I was 10 years old with Laila and my older sister and paying off our town’s mortgages and making money in the game.

This game teaches kids about friendship and money. My town in “Wild World” was called Lucky Star – the star was an actual star symbol. It was a predesigned civilization with its own ready-built structures. It has a special place in my heart with certain characters like Chevre, the goat, and Goldie, the dog. The game left a lasting impression on me and I’m sure on others who play it. I considered it a learning experience – about communication with your neighbors, even if they are anthropomorphic animals, and about personal and financial responsibility, and self expression.

The game of my childhood introduced a feature also found in “New Horizons” where friends can visit each other on their islands. This new game even has a stock market, or “stalk market,” as it’s known.

A character in the game sells turnips to a store that Timmy and Tommy run. Turnip prices go up and down depending on the time of day and the day of the week. But these turnips only last for a week and if the player waits to sell them, the vegetables will spoil. I think it’s great that this game teaches about investing and financial matters. My friends have convinced me to go into turnip-investing since we tell each other our turnip prices when the twins are buying for a large sum of bells, the game’s currency. Turnips are usually sold for around 95 bells, but the twins can buy turnips for as much as 500 bells. Depending on who has the higher turnip price, we’ll visit each other’s islands just to sell turnips.

Hey, it beats watching or reading the news.

In “New Horizons,” up to eight people can be on an island at the same time, including the island’s player. This multi-player feature allows me and my friends to meet up to do something fun virtually. I found myself talking to them on the phone, exchanging fruits or furniture from our islands, and catching fish or bugs. This game seems simple, but during these endless weeks when people can’t spend time in the real world with their friends, it helps us stay social.

I play this game with new and old friends, and for some this might be their first “Animal Crossing” game. This is truly a game for all ages. An 88-year-old grandma in Pennsylvania, Audrey Buchanan, played “Animal Crossing: New Leaf” for almost 4,000 hours and it’s believed she was honored in this new game as a wolf named Audie, although Nintendo will neither confirm nor deny. Some people are spending time with their significant others in the game and some have even proposed marriage in the game.

To me, “Animal Crossing” is more than just a way to kill time during the quarantine. The power of this game is that it fosters togetherness and cooperation at a time when these don’t seem to exist –or matter – much in the real world anymore. I’m not so naive to think there isn’t a profit motive involved, but I’m glad Nintendo has announced that it will continue to update this game with free downloadable content so people can continue to enjoy it.

I plan to make my virtual island a true getaway where no one has ever heard of the coronavirus. 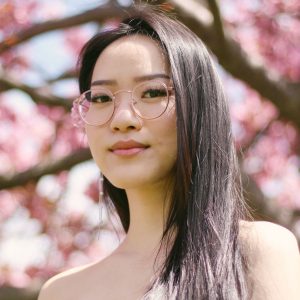 Pamela Wong is a Stony Brook University journalism student. She is the business executive at The Stony Brook Press, a student-run culture magazine. She hopes to one day write about fashion and beauty.